Celebrating World Cancer Day 2017 - but not with alcohol 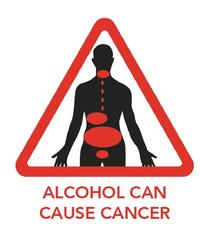 Celebrating World Cancer Day 2017 - but not with alcohol

Still 1 in 4 deaths in the EU are caused by cancer[1]. Fortunately, cancer is in many cases avoidable, and early detection increases the chance of cure substantially. Enough is already known about the causes to prevent at least one third of all cancers[2].

Regrettably, the link between alcohol and cancer is often forgotten. Ethanol found in all alcoholic beverages is classified as group 1 carcinogen, alcohol can cause cancers of the oral cavity, pharynx, larynx, oesophagus, liver, colorectum and breast[3].

First conclusive links between alcohol and cancer were established back in 1987, yet 25 years later only 36% of EU citizens are aware of it[4].

Wendy Yared, Director of the European Cancer Leagues, reminds us that on this World Cancer Day, everyone is encouraged to reflect on what we can do to prevent cancer. She urges all to heed the message that “not drinking alcohol is better for cancer prevention”, as well as other evidence-based advice in the European Code Against Cancer (www.cancercode.eu).

The message in relation to alcohol consumption in the new European Code Against Cancer[5] is: If you drink alcohol of any type, limit your intake. Not drinking alcohol is better for cancer prevention.

Europe is the world’s heaviest drinking region, with some European countries ranking around 2 times above the global average[6]. Awareness about the link between alcohol and cancer is of crucial importance for effective prevention efforts.

There is no level of alcohol consumption that is safe as far as cancer is concerned.

Mariann Skar, Secretary General of European Alcohol Policy Alliance, said: ‘We would like to call on all actors, to help raise awareness about the fact that alcohol contributes to cancer development. It is our right as consumers to know about the side effects that alcohol can cause to our health’

The contribution of alcohol to a range of cancers needs to be better recognized. There needs to be better public information, more awareness among health professionals and effective public health measures to highlight the link and promote action to reduce avoidable illnesses and deaths.